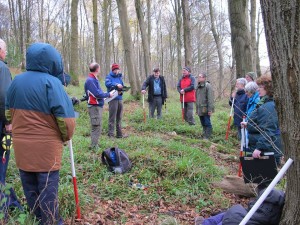 A team of volunteers led by archaeologists from Worcestershire Archive and Archaeology Service will be investigating two sites they have identified at Yorkley. The investigations are being carried out as part of the Foresters’ Forest Project, a Heritage Lottery funded Landscape Partnership Programme being led by the
Forestry Commission.

The work will be taking place over two four day sessions in the middle of May and on Saturday 21st May from 11.00 to 3.00 we’d like to invite you to come along to an Open Day to see what’s been found so far. There will be tours of the site, activities for children, information about the results of the fieldwork and a display of any artefacts recovered.

On the edge of the village of Yorkley, a small trench and some test pits will be excavated to investigate a rectangular enclosure which is defined by a bank and ditch. The team aren’t entirely sure what this site was, but we are hoping that it will be similar to an enclosure investigated a few years ago near Ruardean. The
enclosure at Ruardean turned out to be of early Roman date and is thought to
have been a farm or even a small military fort, so we are hoping that the
Yorkley enclosure is another example of such a site. About half a mile from the
enclosure, we will be investigating a second intriguing site where the heavily
overgrown remains of walls, tracks and other features represent all that is
left of the settlement of Tomlin. Tomlin is shown on 18th and 19th
century maps but by the early part of the 20th century had been
abandoned. Here survey work will try and match the ruins up with what is shown
on the old maps. We’re also hoping that research at the local record office
might help identify the people who once lived here by looking census records,
births, marriage and death certificates and other sources. With luck we may
even find out why the site was abandoned.

The work at both sites will help to highlight the great wealth of archaeology and heritage that lies within the Forest and will also support the development of plans for the future management and protection of such sites, so please come along and find out about these two sites and the wider archaeological survey which we’ve been carrying out in the Forest. The location of the dig and parking (near Woodland Place) is shown on the attached map.