In 1938 F.W. Harvey made a pioneering broadcast at the BBC in Whiteladies Road, introducing the Forest dialect. The slightly pompous BBC, tethered to public schools and received pronunciation (PR) were shaken to hear the voices of ordinary people on the airwaves. The Forest dialect has been a thing of fascination ever since.

75 years ago, Harry Beddington, proud of the dialect tradition and friend of F.W. Harvey, wrote about a character called Jolter using dialect. He also wrote several plays, one of which was awarded a prize at the very early Gloucestershire Festival of Music and Drama.

An ensemble cast of Darren Hoskins, Andy Scarf, Louise Bullen and Lynn Teague will be assembling at Jolter Press, The Mews, Mitcheldean at 6.00pm on Sunday 21st July, to perform a revival of 'Footing the Bill' Harry's one act farce. It is free of charge and a BBC film crew (camera & producer) will be coming along to film for the final scenes of an Inside Out West TV feature on Harry & dialect due for broadcast in the autumn.

Darren, Andy, Louise and Lynn need a good audience to make this a successful production and you don't have to speak in dialect to get what this play is all about. Please support the play and share this opportunity with friends. 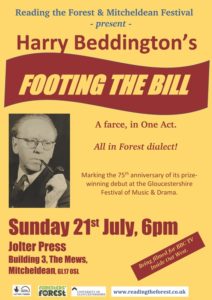