Visit our website at forestofdeanhistory.org.uk
Banwell Bone Cave is quite remarkable. The cave holds thousands and thousands of prehistoric animal bones, about 60,000 years old, washed in there when glaciers melted.
The site also contains a number of beautifully renovated follies, originally built in the 1820s when the cave was discovered and put on display to the public. The two-and-a half hour tour (includes a short film) ends with tea and cakes with the owners.
The caves are on private land and only open to the public very infrequently. Tuesday 27 Sept will be the last time this year as greater horseshoe bats hibernate there, so they don't open again till May next year.
If you are interested, please contact one of the owners, John Haynes
johnatthecaves@btinternet.com for details.
The Society's Annual General Meeting is at 2.30 p.m. on Saturday 8th October at the West Dean Centre, Bream. After a short AGM and the tea break, Ian Pope will talk on "The Crawshays and their Coal Mines".
I attach two documents. One is the Agenda for the meeting. Members – this is your Society and your meeting. If there are issues you want to raise, new Committee members to nominate, now is your chance. Contact Chair Simon Moore or me in advance if you want to. The other attachment is the Minutes of the 2015 AGM. We'll be asking for approval of these.
Best wishes,
Chris
—
Chris Sullivan
Acting Secretary, Forest of Dean Local History Society
visit our website
http://forestofdeanhistory.org.uk/

A petition has been started to appeal to the PROW people to repair and reopen Black Bridge in Lydbrook.
You can read the details and sign the petition here.
Aside from being an important right of way over the river on the Wye Valley Walk, this historic railway bridge is part of our industrial heritage which is fast being eroded and allowed to disappear.
Please sign the petition to show you support its renovation.
The Society's  next indoor meeting will be held in the St Briavels Assembly Rooms tomorrow night, when Jim Chapman will talk to us on the 'History and Mystery of the Perry Pear.'
You can find more details on our events page, which will also give address information for those  not familiar with the Assembly Rooms.
Non-members welcome. Admission £2.
The weather was the only thing which let us down on this important day. The Parkend Silver Band entertained us with a most appropriate playlist, including the previously almost lost Parkend March, and the speeches by Keith Walker, Chairman Simon Moore and our President Baroness Royall were all excellent.
We were especially grateful to have with us 90 year old Mr George Hogg (pictured here), who worked at New Fancy as a blacksmith – they had their own forge, so many shovels etc to repair. And in the crowd also was the great granddaughter of a New Fancy miner.
No doubt there were others with connections – please let us know by posting a comment here.
There will be a full report of the day in the November newsletter which goes out to members.
This website has also been updated with extensive new material on New Fancy and revised material on the Miners Memorial and the Geomap. Follow this link
Finally, our latest New Regard journal was launched yesterday, with the lead article being about New Fancy and how it became an amenity site.  Go to our e-store to purchase a copy (members obtain a discount) or come to one of our indoor meetings where it will also be available, along with other Society and members' publications. 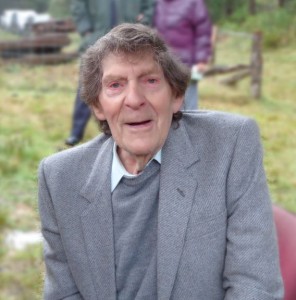 Trade & Transport on the Wye

Life and work on the river

brought to life by the author.