Yesterday evening, the Foresters' Forest programme hosted an evening in Clearwell Caves to showcase the number and range of projects coming together within the Partnership, and to encourage people to volunteer.
The aim of the Programme is to raise awareness and participation in the built, natural and cultural heritage that makes our Forest special. The event was very well attended and a number of Society members were also there.
The Society has been asked to play an important role in the Programme, overviewing the various historical elements. In addition, two of our Committee members, Simon Moore and Mary Sullivan, are members of the Programme Board.
It's not all about history, however, by any means  – there are many strands to this effort, as you can see if you go to their newly launched website here Foresters Forest website
It's important to understand that the total funding is not yet guaranteed. Currently the Programme is in a development phase, finalising projects and objectives and getting together resources.
The whole task is very dependent on volunteers, so please go to the website (and on an ongoing basis as it fills up with more information) and have a look to see how you might like to get involved.
—

The November newsletter published a short article I wrote about the
Speech House pilot who crashed and died there in WW2. First of all, a major
correction – the aircraft was a Westland (as it actually says on the memorial
stone and on the photograph held at Gloucestershire Archives) not a
Westmoreland. A good lesson in seeing what you want to see rather than what’s
actually there.

In addition, Dave Tuffley, one of our members, tells me there was an
excavation there about 1979/1980. Dan Howells, the Deputy Gaveller, did mention
this, but my recollection is that he thought it was not an approved excavation.
In any case, Dave believes the excavation was approximately 1979/1980-ish. The
site, as far as he remembers, is about 60 yards inside the Speech House field, between
the cricket square and the oak trees on the Speech House road side of the
field.

He learned from a Speech House Cricket Club player, Adrian Morgan, that
the excavation recovered some small bones (even though they were told that the
pilot’s body was recovered.) The excavation was stopped when the bones were
found. Some cannon shells or bullets were also recovered.

If anybody has more to add, do post a reply to this item. 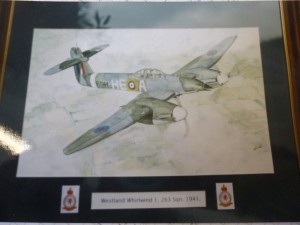 An invitation to the next English Bicknor
Local History Group meeting where the lead archaeologist from
Headland Archaeology, who unexpectedly uncovered a medieval castle during works
for new classrooms at Bicknor School, will talk about this exciting find.

Bicknor’s
history has to be rewritten with this amazing discovery found under our
School.