The Chartists have a new electronic version of the Chartism Mag. So click on the link to go to their website for a host of interesting sections where you can access historical data and imagery as well as current debates about the value of Chartism today.
The site is edited by Les James and David Mayer. If you have any queries or articles you wish to submit please email: les.james22@gmail.com <mailto:les.james22@gmail.com>
Hi members
Last Saturday Cecile and I took our display to Cheltenham as part of the GLHA day on immigration and emigration in Gloucestershire. The display focuses on the New Zealand Memorial Trust set up by the First Viscount Bledisloe.
So that you can see and hear about this topic too, we will be bringing the boards to the next two indoor meetings. After tea on one of them we will do a twenty minute session on the scheme. 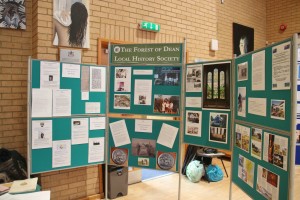 As everybody in the Forest is aware, our much loved Giant's Chair is now being made into charcoal – which was the original intention when it was erected as Place, part of the Sculpture Trail, 28 years ago.  They have promised us a replacement to look forward to.
— 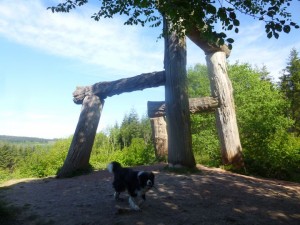 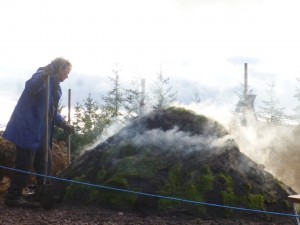 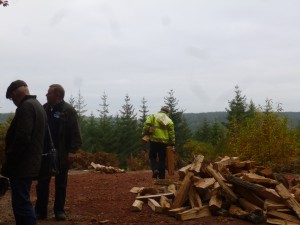 On Saturday 17 October, a few members of the Society joined with a large number of other interested people for a day of learning about the history of Tidenham and surrounds. We started with geology, carried through prehistory, the Romans and Anglo Saxon times to the 20th century, learning about lead fonts along the way. And that was just the morning.
After lunch we broke into three groups – one to Tidenham Church and its lead font; one to Lancaut and the Church of St James; and the third to Beachley to see the remains of what happened there over a short period towards the end of and following WW1.
I was with the Beachley group, so here, in a nutshell, is what we learned from the talk by Carol Clammer and the tour: In 1917 the government evacuated the small village and hastily threw together a vast shipbuilding site, complete with numerous railways, POW huts and labourers houses (some 10,000 people on site), all within a few months. No ship was ever built and it took many years for the villagers to get their homes back and some sort of compensation.
Many thanks due to Ian Standing and the Dean Buildings Preservation Trust for organising an excellent speaker list, and to Tidenham Local History Society for their organisation and for sharing their current research.
Cheryl
— 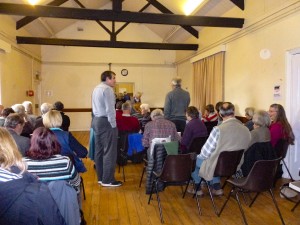 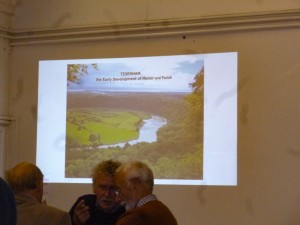 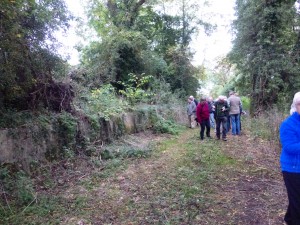 The Society has had the good fortune to add to its stock of books that members can use for research. The new list is attached.

Attached is the programme for the GLHA Day on 24 October, where the topic will be Immigration and Emigration to, from and within Gloucestershire.
As well as a line up of interesting speakers, many Gloucestershire local history societies will have displays on the theme. Cecile Hunt and Mary Sullivan have been working hard on our display, which will feature the Bledisloe New Zealand Trust, set up in the early part of the 20th century by the first Viscount following his term as Governor of New Zealand. Its aim then was to support people wishing to emigrate to NZ. The Trust is still functioning, but now with more emphasis on study periods and the like rather than emigration.
I'm sure it will be a fascinating day, so do take the time to go along.

Anyone who has seen the recent publicity about the potential restoration
of the Scarr bandstand might be interested to know that there
is a meeting to discuss the next steps at Sling Club, Milestone Walk, at 7.00pm on Wednesday, 7th October 2017.

The Society's AGM at the West Dean Centre was well attended by members and several visitors.
The Chairman's Report on activities over the year is attached to this item.
The Scott Garrett prize for best talk in 2015 was awarded by Vice-President Ian Pope to Dr Cherry Lewis for her talk on 'Mushet & his Contribution to “The Map That Changed The World”'. Congratulations to Cherry.
The Cyril Hart prize for best article in New Regard (29) was awarded to Ben Lennon for his article  'The distribution and origin of meends in the Forest of Dean'.  Congratulations also to Ben.
The Society re-elected Simon Moore as Chair and Cecile Hunt as Treasurer, and elected David Edwards as Secretary.
More details of the AGM will be included in the Society's November newsletter.
The formal meeting was followed by Cecile Hunt and Averil Kear's journey through Ironworks in the Forest of Dean over the centuries. A summary of the talk will be available in the November newsletter.
—

The latest edition of the Society's highly respected journal is now available, with a wealth of fascinating and well researched articles.
Over the next few weeks the journal will appear in local shops in and around the Forest of Dean, and it can also be purchased online – go to Publications and click on New Regard to see further details.
Members can obtain a 15% discount by entering the code given in the most recent newsletter.
—